Kevin Cory made a significant return to Cottage Grove Speedway in the Wingless feature. The Medford veteran, racing for car owner Steven Thompson, paced the field for the first lap of the main. Redmond’s Brent Rich, in the Nickye Mendenhall, owned mount, took over the role as the leader on the second circuit.

Rich had a tough task of keeping all challengers at bay. Eventually, Ricky Ashley made his way to the front on the fourth trip past the flag stand. Ashley, of Thurston, managed to construct a massive lead over the rest of the competition.

However, in the late stages of the races, he would be bottled up in heavy lapped traffic. Ricky Ashley lost the lead on lap twenty-four at the start/finish line. The driver taking over the role in the first place position was Jonathan Jorgenson, from Puyallup, Washington. Racing for Tacoma, Washington based car owner Sterling Kane, Jorgenson, led the balance of the distance to pick up a massive win.

A special knock out qualifying format was utilized for the night to determine the winner of the $500.00 bonus courtesy of Herz Precision Parts. Ricky Kirkbride, from Bakersfield, California, was the last man standing and was the winner of the time trial battle. Also, Kirkbride set a new track record in the third round with a time of 12.202 seconds. The old record was established on September 23rd, 2011 by Colin Baker at 12.303 seconds.

In Street Stock competition it was utter dominance from Kelly McDonald. The longtime Cottage Grove racer, in the Tom and Joan Langan, owned machine, took over the lead on lap one. The race only witnessed one stoppage, and McDonald blazed the trail the entire distance. It marked the fourth occasion that the team has won at CGS in 2019.

Creswell’s Garrett Barth finished in second while Adam Applebee, of Eugene, was a respectable third. Troy Chamberlain, from Junction City, got fourth while finishing fifth would be Marcola’s Roger Bell. It was also a clean sweep for Kelly McDonald as he set fast time and procured wins in the heat race and trophy dash.

The same three classes will be back in action on Saturday, September 7th, for the last race of the weekend. Tickets are $13.00 for Adults, Seniors/Juniors/Military $10.00, Youths (6-12) $5.00, and Children (5 & Under) are FREE. Pit Gates open at 1:00 PM, Front Gates 3:30, and Time Trials at 5:30 with racing beginning at 6:00. For more information and updates log on to www.cottagegrovespeedway.com or check out the official Facebook page. 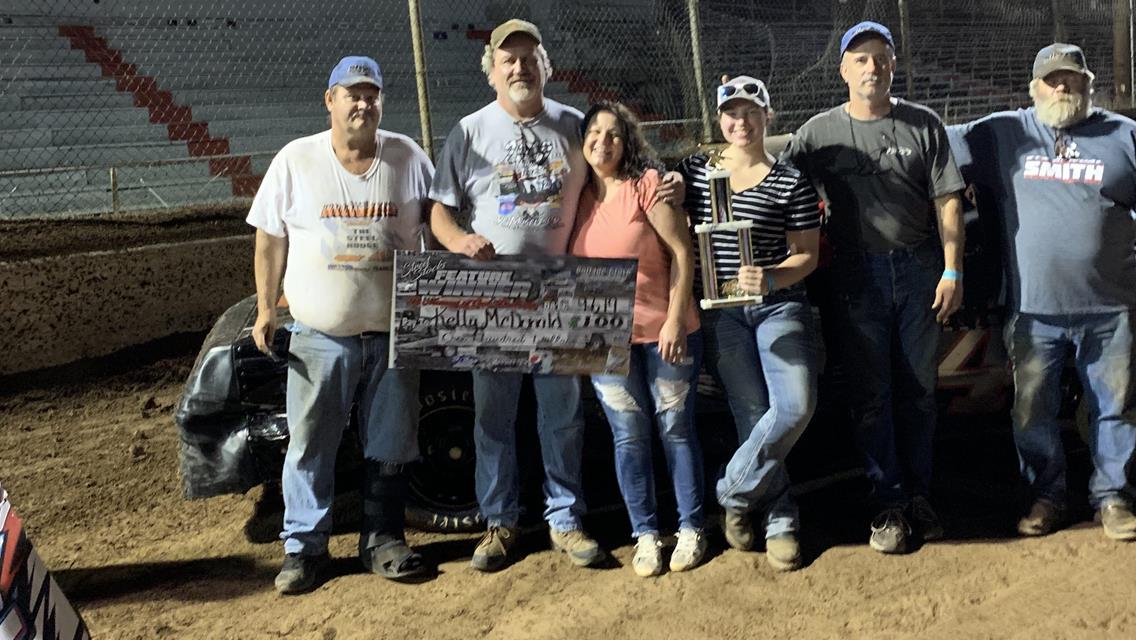