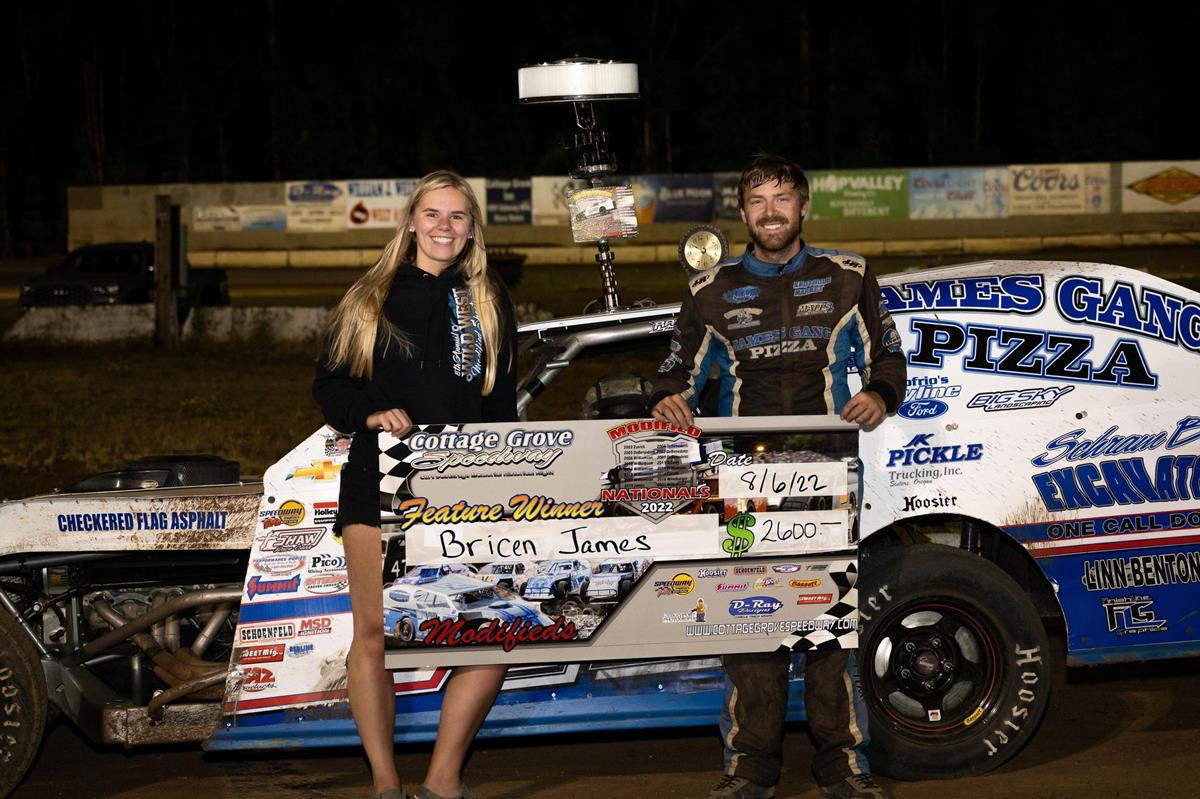 When the fifty-two-lap main event for the IMCA Modifieds got underway, Springfield’s Jake Mayden took control on the opening start. He would be challenged after a lap nine restart before being overtaken on lap twelve by Bricen James. James, from Albany and piloting the Jerry Schram-owned machine, would hold on to P1 for just a few circuits.

Mayden successfully reclaimed the point on lap fourteen. Jake would have his hands full in traffic as James renewed his efforts to get the lead back. After a lap thirty-four fuel stop, the race went non-stop for eighteen more clicks. Finally, Jake Mayden and Bricen James checked out from the rest of the competition.

Bricen James eventually would get back to the front, but Mayden would again challenge him as they operated in traffic. Nevertheless, James would hold on to procure his second career Mark Howard Memorial Modified Nationals triumph. The last time he won this event was in 2019.

The Royalty Core Custom Grill & Truck Parts IMCA Northern SportMods had an exciting main event. Chuck Carson, from Springfield, would beat out Brookings native Isaac Sanders for the lead on the first lap. However, Sanders maneuvered around Carson on the second circuit to be the new pacesetter.

Sanders would inhabit the top spot until Daniel Ray of Springfield passed Isaac for P1. Then, unfortunately, Ray would get tangled with a lapped car on lap ten, which resulted in Ray Bloom inheriting the lead.

Bloom, from Creswell, remained at the point for quite some time. After a lap twenty restart, It would be a shootout to the finish. Matt Sanders, also of Brookings, motored his way past Ray on the final circuit to win his fourth race at CGS in 2022.

Ray Bloom earned second, while Salem’s Trevor Points was credited with third. The rest of the top five finishing order consisted of Lebanon driver Dalton Bloom and Isaac Sanders, in fourth and fifth.

The Hardtops were on hand for a rare appearance. Klamath Falls driver Zack Toll parked the Donnie Fain-fielded car in victory lane. Jimmy Smith and Chuck Jacobs were second and third. Steve Hopkins beat out Brian Lenihan for fourth place.

Cottage Grove Speedway returns for another doubleheader weekend with the Dwarf Car Nationals with the Western Dwarf Car Association on Friday, August 12th, and Saturday, the 13th. Saturday will have the Wingless Sprint Series in attendance too. For more information, log on to www.cottagegrovespeedway.com.