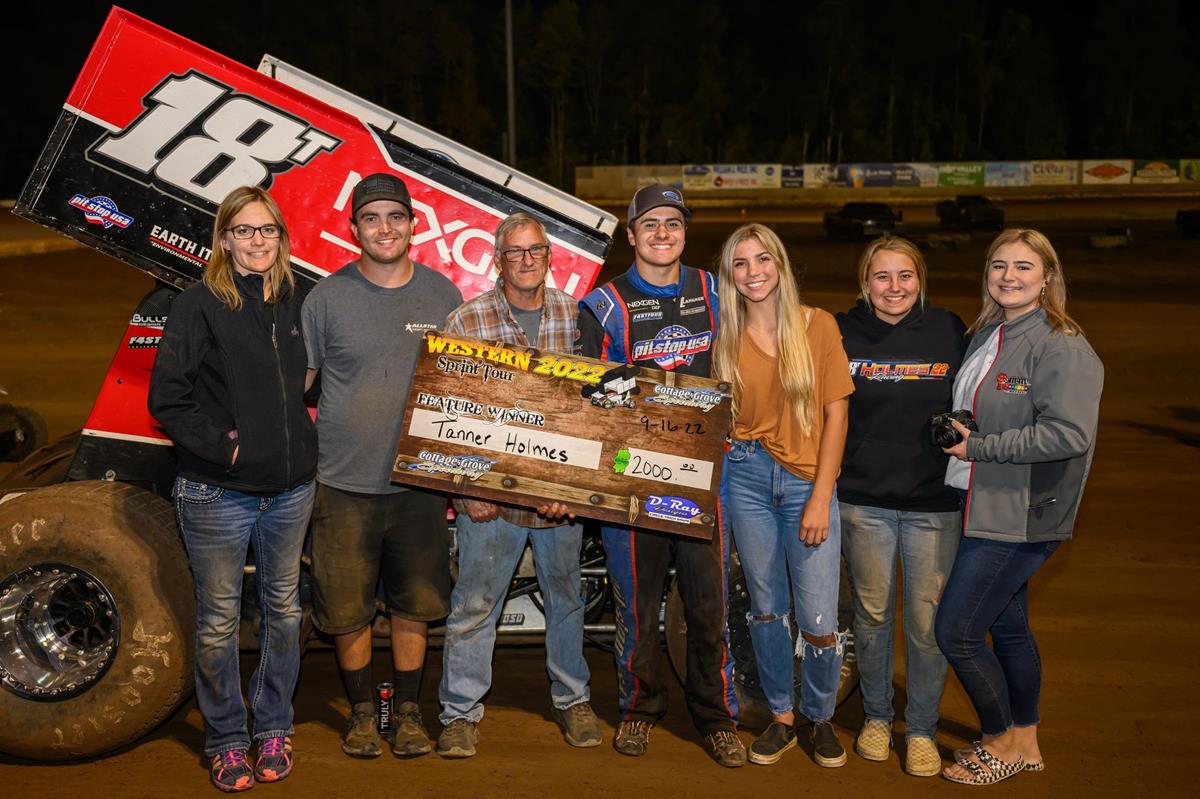 Boise, Idaho racer Logan Forler got to the point when the green flag dropped for the Western Sprint Tour main event. He would pace the field until lap fifteen, when he was overtaken in lapped traffic.
Tanner Holmes was the one to perform the pass.

The Jacksonville driver dominated the rest of the way to earn his third WST victory of the season. Logan Forler was second, followed by Harrisburg’s Tyler Thompson, in the Blake Cook fielded entry, in third. Roseburg natives Steven Snawder and Matt Hein, driving for Brett Smith, were fourth and fifth.

Ricky Ashley, of Thurston and driving for Roy Kirk Jr., paced the field in the first few laps of the IMCA Modified main event. He held on to P1 until the third circuit when Jesse Williamson got around him. Williamson, from Coburg, had to deal with two restarts but remained on top to win the feature.

Preston Luckman was the dominant force in the Late Model feature. Luckman took over the top spot from Bellefountain’s Willie Sutton around lap seven. From there on out, Preston had no issues and won the non-stop race.

Eston and Jimmy Whisler, both from Otis, were second and third. Stayton native Bryan Norton crossed the line fourth, while Braden Fugate of Bandon earned fifth.

For some time, Kasi Comer was the lead element in the Royalty Core Custom Grille & Truck Parts IMCA Northern SportMods. Comer, from Springfield, was the initial race leader and held the position down until lap six. After that, Lebanon’s Dalton Bloom powered his way to first place and led the rest of the main event in dominating fashion.

Brothers Matt and Steven Sanders of Brookings were second and third in the finishing order. Roseburg racer Jordan Henry hit the line fourth, and Daniel Ray, from Springfield, wrapped up the top five in fifth.

For the Street Stocks, it was all Taunton Swaim. Swaim, representing Dexter, led the entire race; however, he was challenged several times. But with each attempt to overthrow him, he withstood all efforts and won the main event.

Andrew Langan, from Jasper and running for owner Josh Linville, was second to the stripe while Veneta’s Garrett Craig was behind him, in third. Brad Hicks of Creswell and Cottage Grove veteran Kelly McDonald were fourth and fifth.

In the IMCA Sport Compacts, Dusten Henderson was the trailblazer for the first four circuits.
The Cottage Grove driver was passed on lap five by Chris Pierce. Pierce, also from Cottage Grove and running for owner Randy Kuhl, dominated the balance of the race to win the feature.

Sutherlin’s Burnie Bryant and Dusten Henderson were second and third in the rundown. Barry Cannon of Dexter beat out Cottage Grove chauffeur Kerry Cooper for fourth.

Cottage Grove Speedway returns to racing action on Saturday, September 17th, for the final points race of the season. Again, all of the same seven classes will be in attendance. For more information, log on to www.cottagegrovespeedway.com.